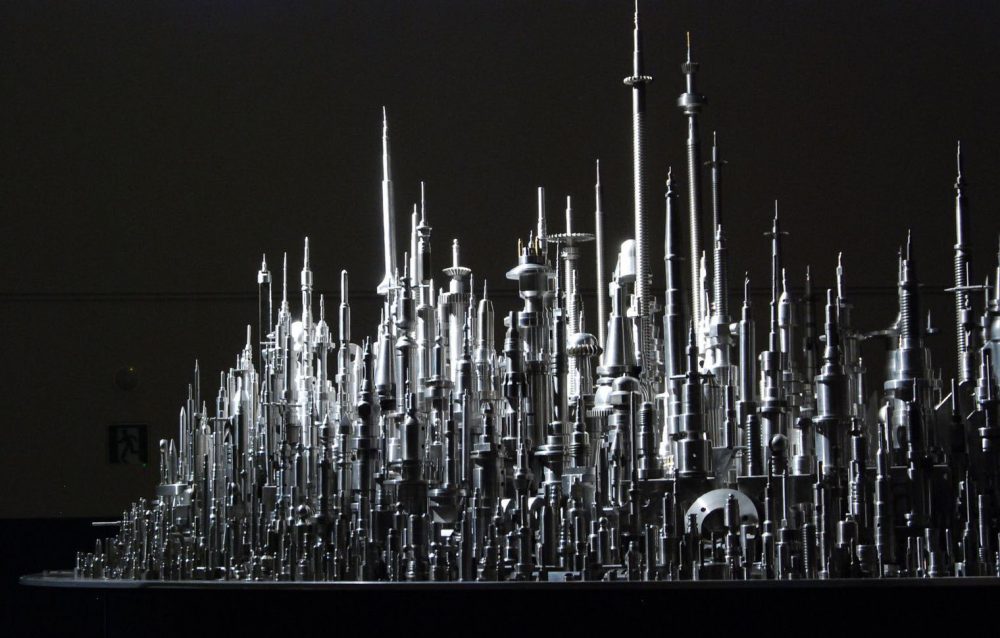 *In conjunction with Takahiro Iwasaki Solo Exhibition Watch the sky through the eye of a needle
*To protect public health against COVID-19, we will shorten the opening hours, and suspend the reception event.

The exhibition title RPM-1200 is also the title of one of Enoki’s signature opuses, and is derived from the rotary speed of a lathe (1,200 revolutions per minute). As a seikatsusha(1), Enoki worked as a metal mold craftsman until retirement age. RPM-1200 consists of machine parts that he processed with a lathe after working hours and steadily added to the composition, one at a time. It is a dense aggregate of seemingly countless bolts and other items that were machined with a precision down to one-hundredth of a millimeter in order to discharge an exacting function, all patiently stacked like building blocks and put in place manually by Enoki. It has been called one of his pinnacles as regards the degree of formative sophistication(2).

Centering around the iconic RPM-1200, this exhibition is a retrospective one encompassing his series of works on guns including AK-47 and COLT-AR-15, his Patrone(3) series, Went to Hungary with HANGARI, and materials documenting his activities since the 1970s, after he stopped painting. 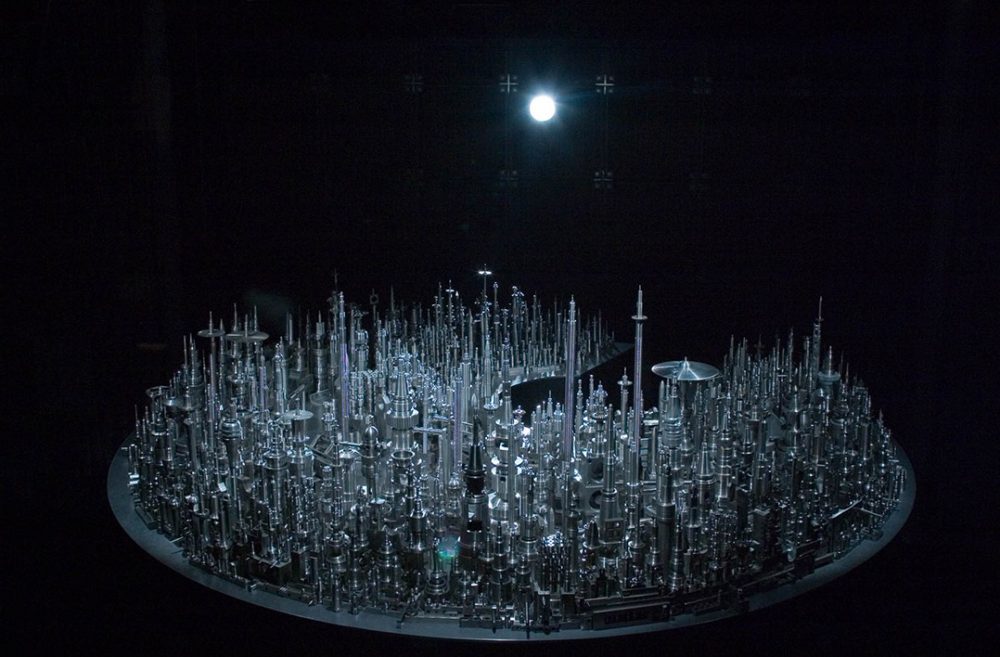 Born in 1944, Chu Enoki is nothing less than a giant of the contemporary art world. Never even giving the art establishment a single thought, he has independently developed works on mind-boggling scales.

Way back in 1970, Enoki created a stir when he strode down Japan’s first outdoor “pedestrian paradise” in a traditional loincloth, the emblem of the Osaka World’s Fair (Expo’70) stenciled on his stomach by the rays of the sun, until he was arrested on the charge of disturbing the peace. While he had been producing paintings for the art association Nikikai up to that time, he conceived and executed this happening after suddenly awakening to contemporary art. In the same year, he organized Japan Kobe Zero and threw himself into anti-art activities.

In 1972, he staged another happening with the involvement of other people and the wind. In it, 33 members of Japan Kobe Zero, who wore matching red shirts, carried an enormous white cloth measuring 400 square meters and used the wind to produce a variety of shapes with it. The group boldly pulled off the performance without a hitch, perhaps because it occurred on the day of the Kobe Festival and people assumed it was a part of that event. The doings came to a Christo-like conclusion when the members covered up a big fountain with the cloth.

Enoki started to make big iron cannons around this time, and completed Life Self Defense Force (LSDF), a work taking weapons as its motif, in 1979. Viewers were blown away when he fired blanks from the cannons, accompanied by an ear-splitting roar that rattled windows. Instead of a cannonball or shell, it was rose petals that were blasted out of the muzzle. The dashing Enoki still stages this event on occasion. 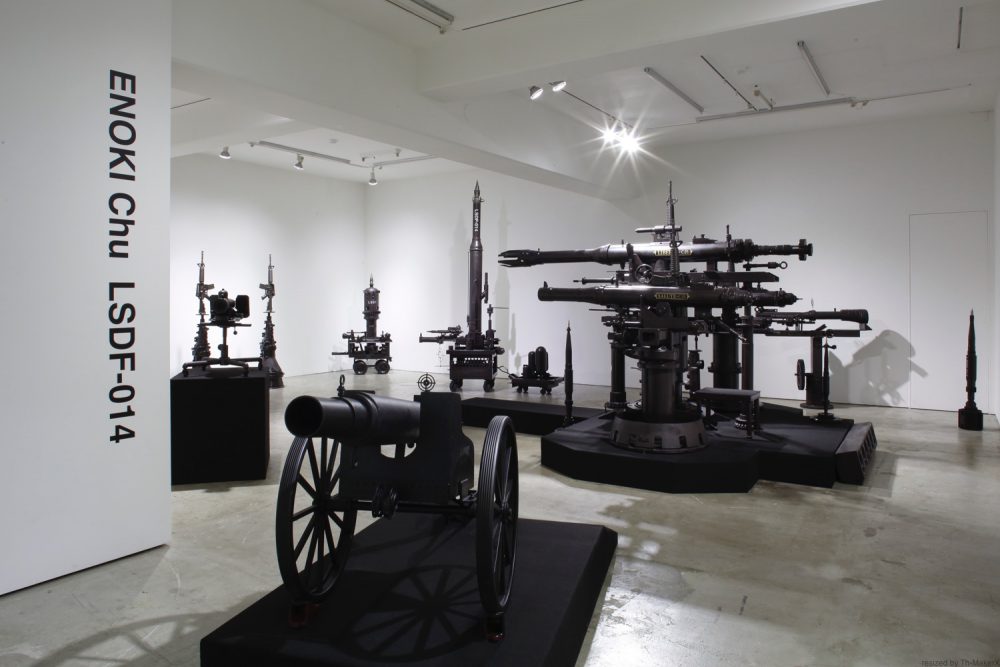 In 1977, Enoki went to Hungary, which was then part of the Eastern Bloc, with the hair on half of his entire body shaved off. (Perfectionist that he is, over a period of four years, he let his hair on the shaven side grow back and then had the other half of his body shaved.) Around the same time, he began making appearances as Rose Chu, a moustachioed but alluring female avatar of his. In this persona, he had guerrilla openings of Bar Rose Chu, a bar in which the “customers,” who were seated on a long see-saw-type bench, had a hard time getting up because they would lose their balance when they tried to. The bar became another chapter in the Enoki legend. 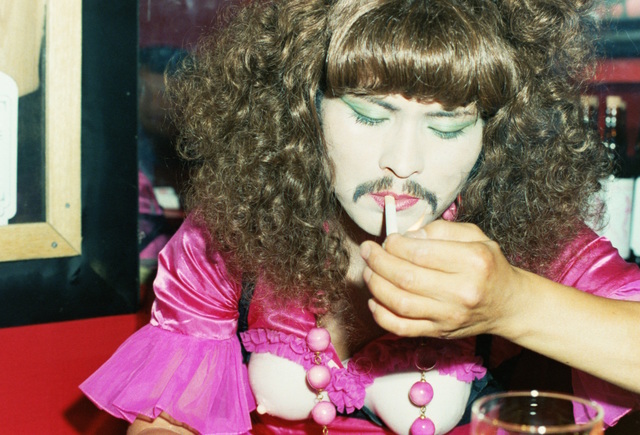 In 1981, Enoki produced Space Lobster P-81, a massive installation with a total length of 13 meters, using an astounding 25 tons of scrap metal. While brimming with a femininity by virtue of its meticulous make, the work is therefore incomparably masculine in respect of its sheer scale. This was followed in the 1990s by Tearing Off the Skin of the Earth, an earthworks-caliber project; Cartridge, a work containing one million spent bullet cartridges; and a stream of other works that were highly suggestive and wowed all who saw them. 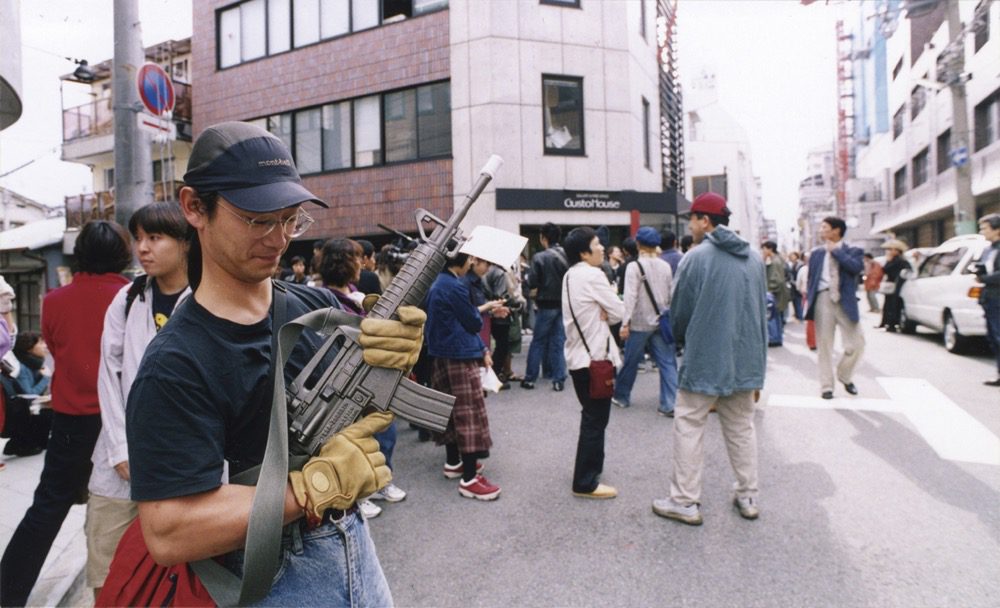 At the start of the 2000s came an “incident” in which more than 200 members of the general public marched through the streets of Kobe carrying a total of 70 guns (imitations made by Enoki, of course). In fact, this was a witty approach to the transportation of his works from the venue of a solo exhibition to another gallery, a task that took about an hour and a half. “It was an exquisite piece of irony on his part that Culture Day was chosen for this action”(4). At the same time, however, this happening unfolded in a very tense atmosphere. Kobe was then the site of the headquarters of the Yamaguchi gang of yakuza. There was consequently a danger that the group would be attacked with real guns by gangsters who thought their guns were real, as well as a high risk that alarmed citizens would call the police on them.

“For some reason, I hesitate to call this march a performance. This is because it is simultaneously both art and reality. The art is realized through the body of Enoki and those of the other participants. To Enoki, art is nothing less that the firsthand experience of contacting raw realities from which we are ordinarily distanced by our ideation.”

– Comment by Kazuo Yamawaki, excerpted from the brochure for the Enoki’s exhibition “Made in Kobe”. 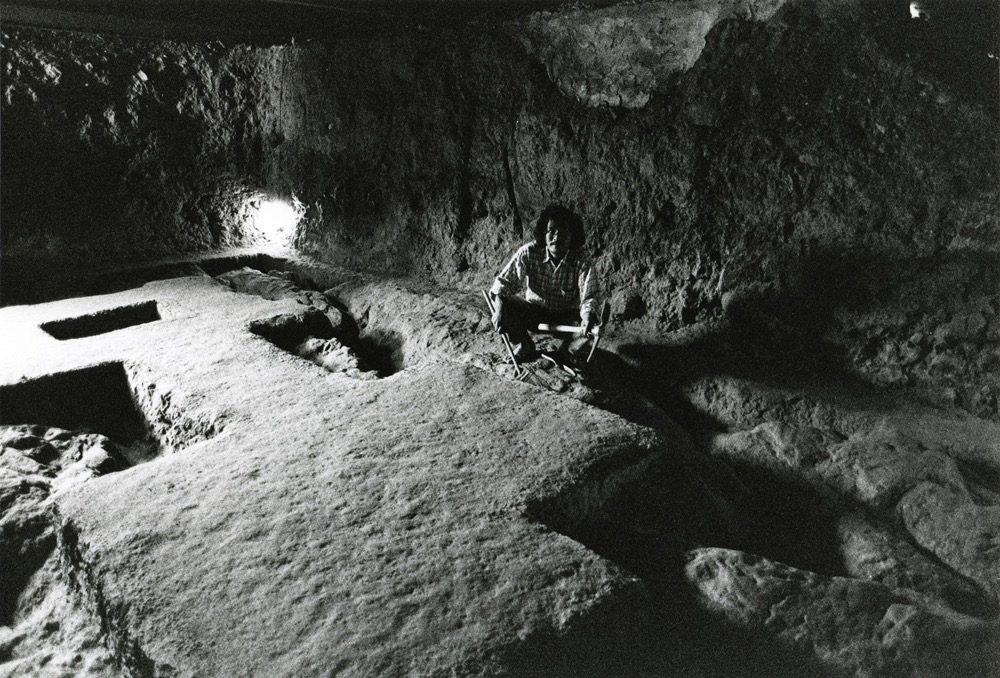 Tear off the Skin of the Earth, 1990 Photo: Teizo Yoneda

In a subsequent solo exhibition at the Hyogo Prefectural Museum of Art, Enoki showed works made with a combined total of about 40 tons of scrap material from the construction of Tokyo Skytree, and celebrated the opening by firing his cannons. With his trademark unbridled behavior, Enoki “unleashing the museum” and pushed back the perimeters of its system.

Enoki’s art prompted one critic to muse that, if he had been born in the United States, he would have attained the status of a sensational artist ranking alongside Chris Burden and Paul McCarthy. Backed by a constantly growing crowd of supporters, both male and female and of all ages, he is still the enfant terrible of Japan’s art world, and possessed of an unfaded charisma.

This “all-about-Enoki” exhibition takes a comprehensive look at his activities stretching back over the last 50 years. While representing a big breakaway from the notion of “art within art,” he will probably be discussed at length in formal art histories in the end. We hope you will take advantage of this golden opportunity to see the career and soul of this extraordinary Japanese-born talent.

All the scrap machine parts I employed for this artwork are processed with a lathe and drilled holes while the original function is detached completely. They are not welded together but rather, stacked high like building blocks. By doing so, the slight misalignment and tension agitate us with a feeling of discomfort, just like the artwork is now given another life.

The title “RPM-1200″ originates from the rotary speed of an old lathe (1,200 revolutions per minute) that for a long time, I worked as a metal mold craftsman. I have been motivated to create various artworks to convey the fascination, beauty, and mystery of iron I worked on for the last four decades. By exploring why these machine parts have gone wasted, the daily life of people who engaged with the industry has come to the surface, and ultimately, it became an uncanny landscape seen in this work. I intended to create it with all the metals.

For the exhibition at ANOMALY, 2020
Chu Enoki

Notes:
(1) At the foundation of everyday life is an awareness that living is self-production. seikatsusha are people who identify necessities and freedoms in the areas of time and money, constantly distinguish the two from each other, and voluntarily curtail their behavior as consumers (i.e., targets of mercantile stratagems in the mass-consumption society) to the minimum while always ensuring necessities.
(2) Norihiro Nakajima (2006), p.48, Enoki Chu to sono jidai [Enoki Chu and that era], EVERYDAY LIFE/ART: ENOKI CHU, Seigen-sha.
(3) Patrone (Filmpatrone in German) refers to a cylindrical cartridge that holds tightly wound film which can be loaded into the camera without removal from it. It was invented for 35-mm photographic film. In German, the word Patrone alone now refers exclusively to ammunition.
(4) Kazuo Yamawaki (2006), p.179, Machine gun no koshin [Machine gun march], EVERYDAY LIFE/ART: ENOKI CHU, Seigen-sha.

Went to Hungary with HANGARI, 1977

Notification of precautions and requests

To prevent the spread of COVID-19, and to ensure the safety of visitors, artists, staff, and the community in compliance with the government’s health guidelines, please take a moment for the following requests upon your visit.

Visitors are asked to wear masks and sanitize hands before entering the gallery. Hand sanitizer is available at the entrance.

Please refrain from visiting the gallery if you have symptoms such as a fever (37.5°C or higher) or cough.

Our staff will have temperatures taken before coming to work to check health conditions every day, and will guide you by adopting frequent hand hygiene and wearing masks.

The entire space will be regularly ventilated and we will disinfect the high-touch areas.

Please check our website or SNS for the latest information about opening hours, as we may change it or close the gallery in unpredictable circumstances.

We appreciate your cooperation.