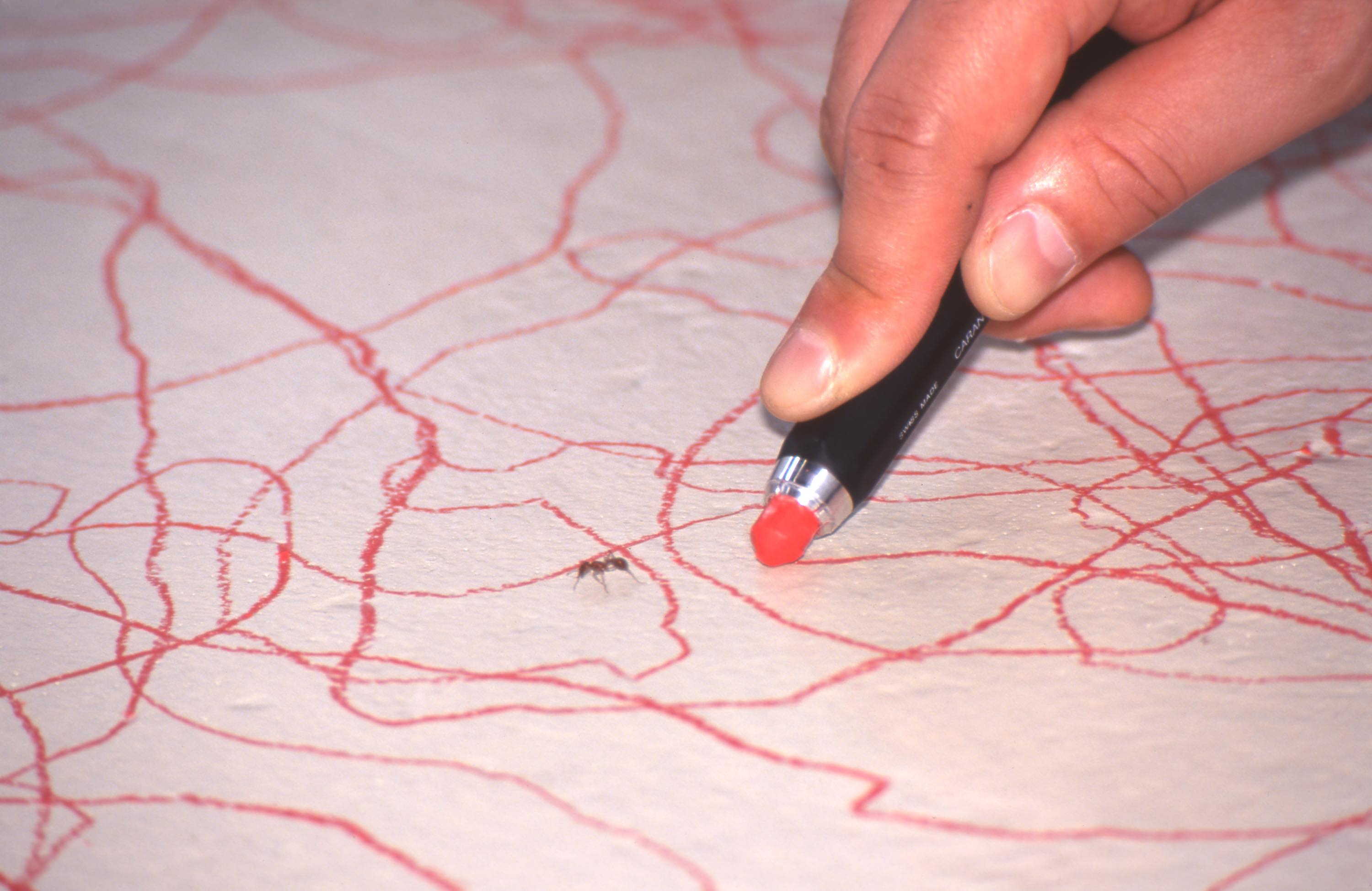 We are pleased to announce the upcoming solo exhibition of works by Yukinori Yanagi titled “Wandering Position 1988 – 2021”, from Saturday, March 6 to Saturday April 3, 2021.

“Wandering position” is Yanagi’s term for the concept at his point of origin as an artist, and has often been used in the titles of his works and exhibitions. Yanagi has produced a series of Wandering Position works that he made by releasing a single ant, diligently following its path, and retracing the same with a piece of red chalk. From this series, the exhibition will display a new work made especially for it on large-sized paper several meters long and precious works dating from the artist’s residence in the United States in the 1980s and 1990s. Titled Ant Following Plan, this series began in 1988, when Yanagi was in his first year of graduate studies at Yale University and had started to explore his own identity. It was born when he casually followed the path of an ant crawling across the floor of his studio. This is a major work that subsequently led to his iconic Ant Farm series, in which the ants carrying grains of sand gradually riddle sand paintings of national flags and bills of currency symbolizing man-made institutions with their tunnels. Continually wandering ants fail to notice the existence of any people following them, since they are gigantic by comparison.

“The boundaries that ants cannot recognize – their inability is intimated by densely drawn red lines that trace their repeated movements toward the metal bars – are not only physical borders but also a metaphor for the “imaginary boundaries” that regulate human behavior. Therein, the ants’ predicament parallels the existential condition of humans.” 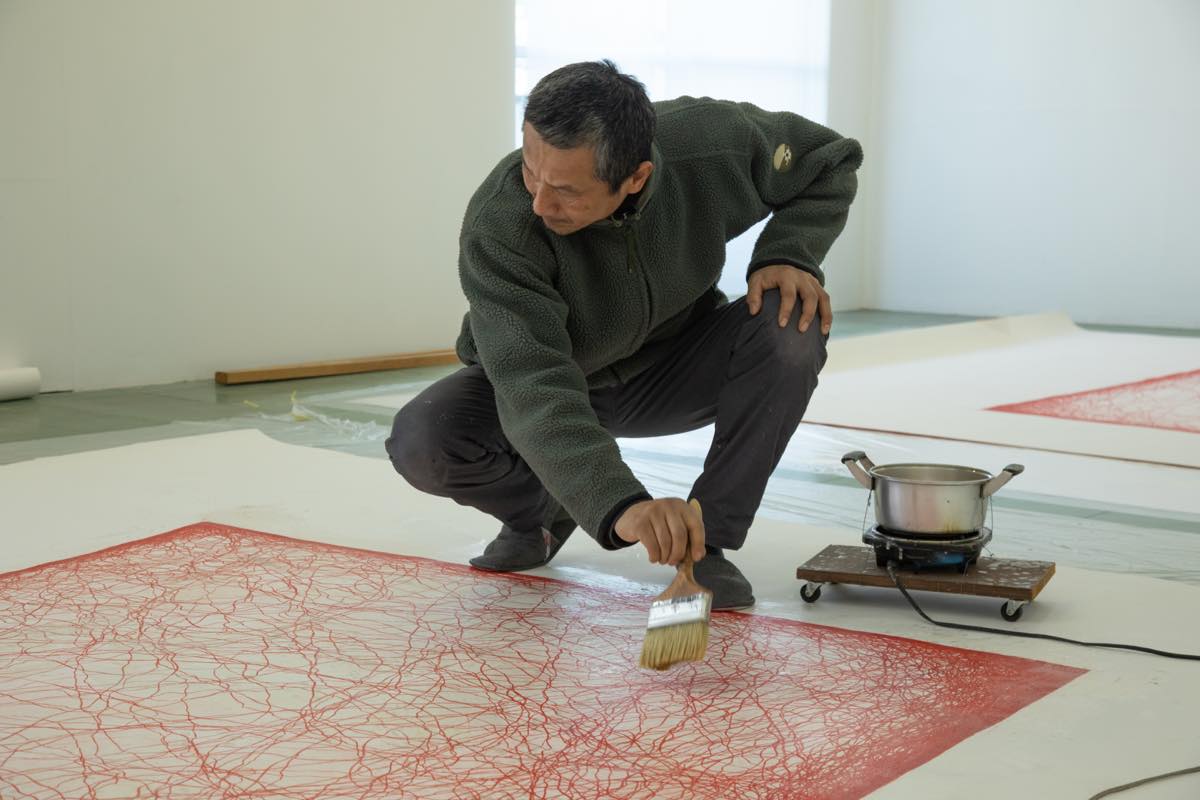 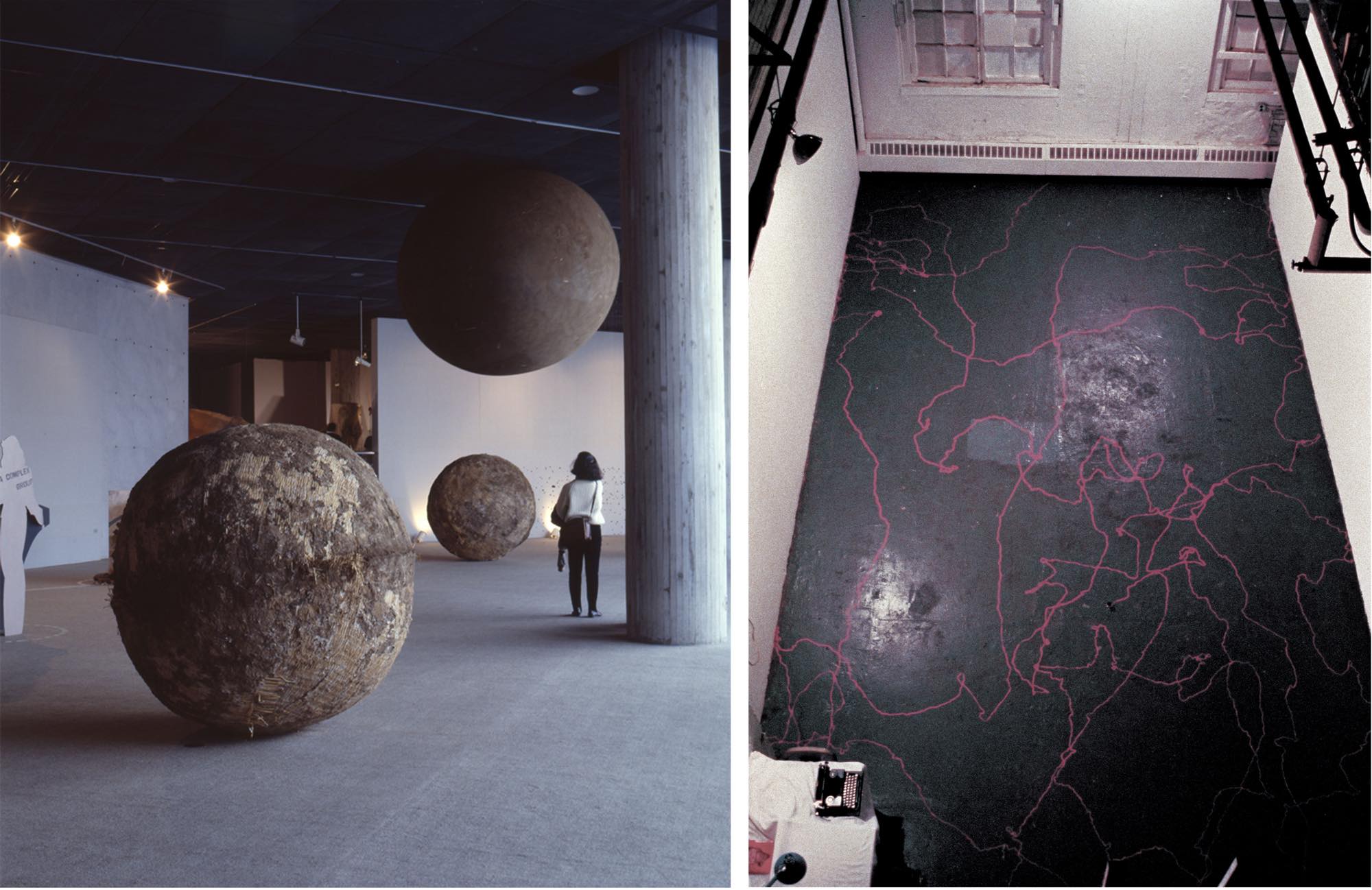 Born in 1959, Yukinori Yanagi studied under artists of the Mono-ha generation and was also influenced by the works of Noriyuki Haraguchi, who regrettably passed away last year. Feeling misgivings about the atmosphere of impasse he felt was cloaking art universities and the art world in Japan, he left for the United States to pursue graduate studies at Yale University in 1988, after presenting a large-scale installation and performance in 1986 and 1987. In 1993, he gained international praise when he became the first Japanese artist to be given an award in the Aperto section of the Venice Biennale for his The World Flag Ant Farm. In 1995, he participated in “Scream Against the Sky”, a group exhibition held by the Guggenheim Museum, and lit up the streets of New York with a sensational work depicting a motif of a Japanese flag in neon. While obtaining many opportunities for international showings of his art and assured of commercial success as well, he returned to Japan after displaying a work taking the American flag as its motif at The Whitney Biennial in 2000.

While the political and social dimension of contemporary art in postwar Japan has become diluted, Yanagi undertakes production with a constant awareness of, and consistent thought regarding, systems in such forms as nations, institutions, and capitalism, and his own position. For his works, he uses diverse items, including everyday materials (e.g., PVC figures, neon, and toys) that also have a cultural significance, and articles selected for some connection with the location of the exhibition. His methodology has likewise continued to change and evolve with the times and specific themes. His works have plenty of visual impact, and their refined expression admits of various interpretations depending on the perspective of the viewer. The ambitious projects he has executed on Inujima Island in recent years and on Momoshima Island (the center of his current activities) and its vicinity are practice-oriented artworks that look back at the historical path taken by Japan as it prioritized economic growth, and link this to the future.

Although Japan has not yet finished compensating those victimized by the Great East Japan Earthquake or cleaning up after the nuclear catastrophe some ten years after its occurrence, we have been visited by an unprecedented crisis of global proportions owing to COVID-19. The reality is that control of populaces by national governments and of borders to restrict the movement of people and goods is becoming tighter, for the purpose of vaccine distribution and economic aid aimed at national protection and safety. Under these circumstances, the exhibition ponders the prospect of flexibly and soundly wandering toward “movement, sea travel, the horizon becoming visible by shifting position,” in Yanagi’s words. Precisely because of where we are now, in the red line of life indicative of mind-boggling distance and time seen his work, we just may be able to see the clear outlines of what lies at the other end of Yanagi’s gaze.

Born in Fukuoka in 1959. Yanagi received an MFA in Sculpture from Yale University in 1990.

In 1993, Yanagi participated in the 45th Venice Biennial and became the first Japanese artist to be selected from the Aperto exhibition as an emerging artist. Yanagi’s works were in numerous international exhibitions including Bienal de São Paulo (Brazil) in 1996, la Biennale de Lyon (France) in 1996, and Whitney Biennial (United Status) in 2000. At the 21st Biennale of Sydney in 2018, he showed a large-scale installation combining various works.
Yanagi also showed his works in Japan in many solo exhibitions, among them Naoshima Contemporary Art Museum, Hiroshima City Museum of Contemporary Art, Fukuoka Art Museum and BankArt (Yokohama.) In 2008, he completed his long-term project, Inujima Seirensho Art Museum in Okayama, which exhibits a permanent site-specific installation of the artist.

Notification of precautions and requests

To prevent the spread of COVID-19, and to ensure the safety of visitors, artists, staff, and the community in compliance with the government’s health guidelines, please take a moment for the following requests upon your visit.

Visitors are asked to wear masks and sanitize hands before entering the gallery. Hand sanitizer is available at the entrance.

Please refrain from visiting the gallery if you have symptoms such as a fever (37.5°C or higher) or cough.

Our staff will have temperatures taken before coming to work to check health conditions every day, and will guide you by adopting frequent hand hygiene and wearing masks.

The entire space will be regularly ventilated and we will disinfect the high-touch areas.

Please check our website or SNS for the latest information about opening hours, as we may change it or close the gallery in unpredictable circumstances.

We appreciate your cooperation.