To ensure the safety of our communities and help to prevent the spread of COVID-19, ANOMALY will be closed from Wednesday, 1 April.
We will monitor the situation and announce the re-opening of our current show “Yusuke Asai; Gimme Something/To Eat” on this page. We apologies to those who have planned to visit us in the coming days. 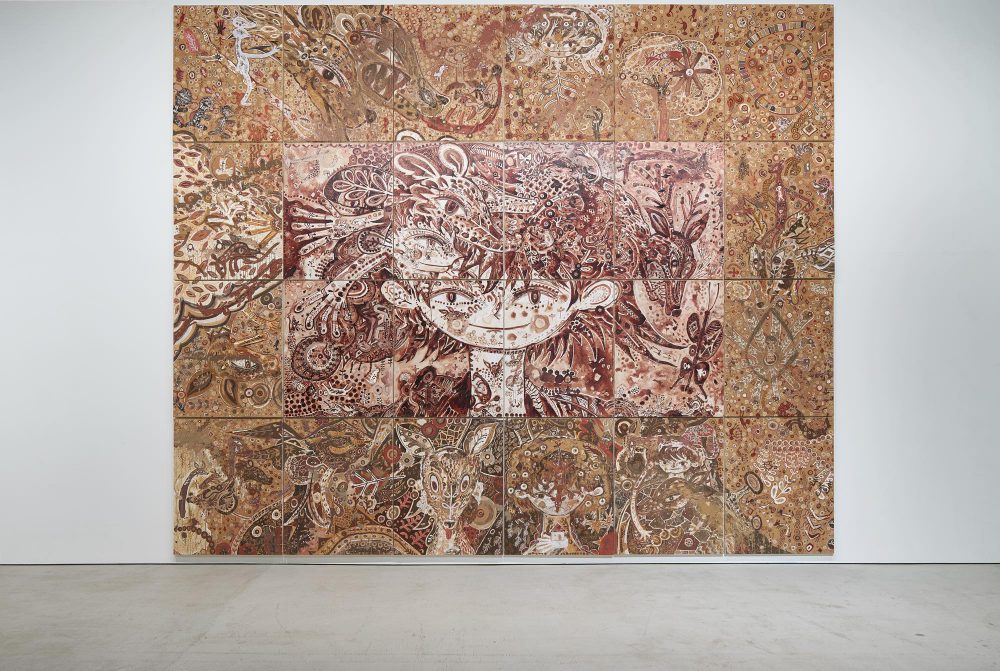 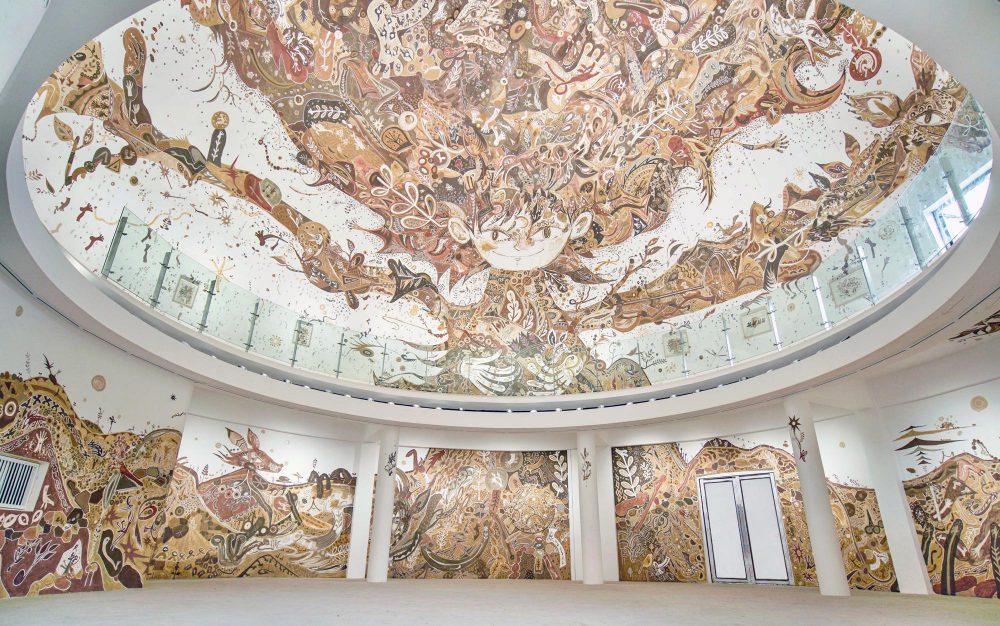 We are pleased to inform you that ANOMALY will be presenting ”Gimme Something/To Eat,” a solo exhibition by Yusuke Asai, from Saturday, March 7 to Saturday, April 18. *Temporary Closure

Born in Tokyo in 1981, Yusuke Asai continues with his unrestrained creation of art in all sorts of places, using everyday materials such as soil, water, dust, flour, tape, and pens. His works also vary in scale, which he freely adjusts to the host site and environment, and range from little drawings on the backs of cube sugar wrappers and coasters to enormous murals covering interior walls.

Born in an endless stream, his primordial motifs encompass images of plants, animals, people, and myth-like entities that appear to be hybrids of plants or animals and human beings, all arrayed side by side, without leaving any gaps of blank surface. Some seem to display an eco-structure by, for example, having smaller plants or animals nested inside larger creatures. They are wrought with an intricacy and complexity that may even surpass the world of real counterparts.

Asai’s art may basically be divided into three series: the Earth painting series created with samples of soil and water taken from various places, the White Line series made by torching thermobonding sheet used for markings on asphalt roads, and the Masking Plant series of drawings made with a permanent marker on masking tape. His artistic activity is not confined to production by himself in his studio; he also undertakes big projects involving collaboration with friends, volunteers, or other third parties. As they take shape, his works seem to enjoy their own growth while accepting change, and the process of their production unfolds dynamically, as if the artist is trying to implant the “wildness” which urban settings are said to lack and require.

This exhibition, Asai’s first solo one in a gallery in four years, will show his latest drawings and paintings. “Gimme Something/To Eat,” its title and thematic watchword, symbolizes the savage first cry emitted by all life upon entry into this world and the initial outburst of emotion.

Over the last few years, Asai has learned much about “the wild” and deepened his thinking on the subject through his production in various places. The output is exemplified by the many drawings he made on a journey around the Eurasian continent, a huge mural measuring 30 x 40 meters in Tennozu, Tokyo, circular mural at the Yokohama Museum of Art, dome-shaped ceiling painting in Chongqing, China, 250-meter-long geoglyph in Shanghai, and earth paintings in Northern Ireland, Ishinomaki, and Inawashiro, both in Japan.

Asai’s use of soil as a material in his works goes back to 2008, when he participated in a group exhibition held in Indonesia and created a mural with local soil and water. As a medium that does not depend on any special art supplies, soil is at everyone’s feet and apt to be overlooked by reason of its ready availability. Asai incorporated it into his works while highlighting its natural features in respects such as color, particle size, and viscosity, which differ with the climate and terrain. In the process, he established a unique style of his own.

Toward the end of last year, he accompanied Nozomu Onodera, a deer hunter whom he met at the Reborn-Art Festival, on a hunting expedition on the Oshika Peninsula, and retrieved some blood from wild deer during it. He took up the challenge of painting with this blood as a new material for the first time.

Generated by bricolage (*1), Asai’s drawings and paintings bring fertile alternative perspectives and new discoveries to our everyday life. Utterly unbridled, his quasi-primitive expression continues to broaden and excite our minds and sensibilities.

A talk event is also scheduled to be held during the run of the exhibition. We will provide information on the details once they have been determined.

This year, Asai will also be participating in the Northern Alps Art Festival 2020, “Nature Human” Exhibition at the Tokyo Metropolitan Teien Art Museum, and  Tobiu Camp 2020.

(*1) bricolage: “To make something with your own hands, using whatever tools and materials are available.”
(The Japanese translation of “La Pensée sauvage,” Claude Lévi-Strauss, Misuzu Shobo, 1976, p. 22).

Animals that were born and raised in the wild and live there have no margin for getting depressed and doing nothing because they have failed. Failure is just another aid for taking a closer look at the world, making adjustments, and refining skills. Through the repeated execution of this process, they commend themselves to the environment from the very depths of their bodies, and proceed to change and stabilize, taking their time in doing so.

As I paint, I am sometimes thrown off the plan at a certain moment and unexpectedly jump to a place where nothing has been prepared / in spite of my intention of running straight down a well-lit path I know well, in an instant I find myself standing in a twisted, bizarre, dark place completely unfamiliar to me, before I knew it / then I dig in and the wild animal inside me awakens and takes a look around / it’s okay it’s okay / fail as much as you want / you’ll survive somehow on what’s available / I feel, “Well, if that’s what you say …” And then, before I end up halting the motion of my hand, I can paint straight through (letting it all out), completely absorbed – unsteady though I may be.

When things go even better, I shake off all the preconceptions and move in a direction enabling pure enjoyment of the unforeseen appearing right before my eyes, and if the switchover goes perfectly, I can reach places that are incredibly far from the one I targeted.

I am determined to keep taking second looks at more of what is taken for granted before our eyes and live on over and over again, through my painting or drawing on walls or paper or canvas, always retaining the sense of marvel, awe, and joy in depiction. 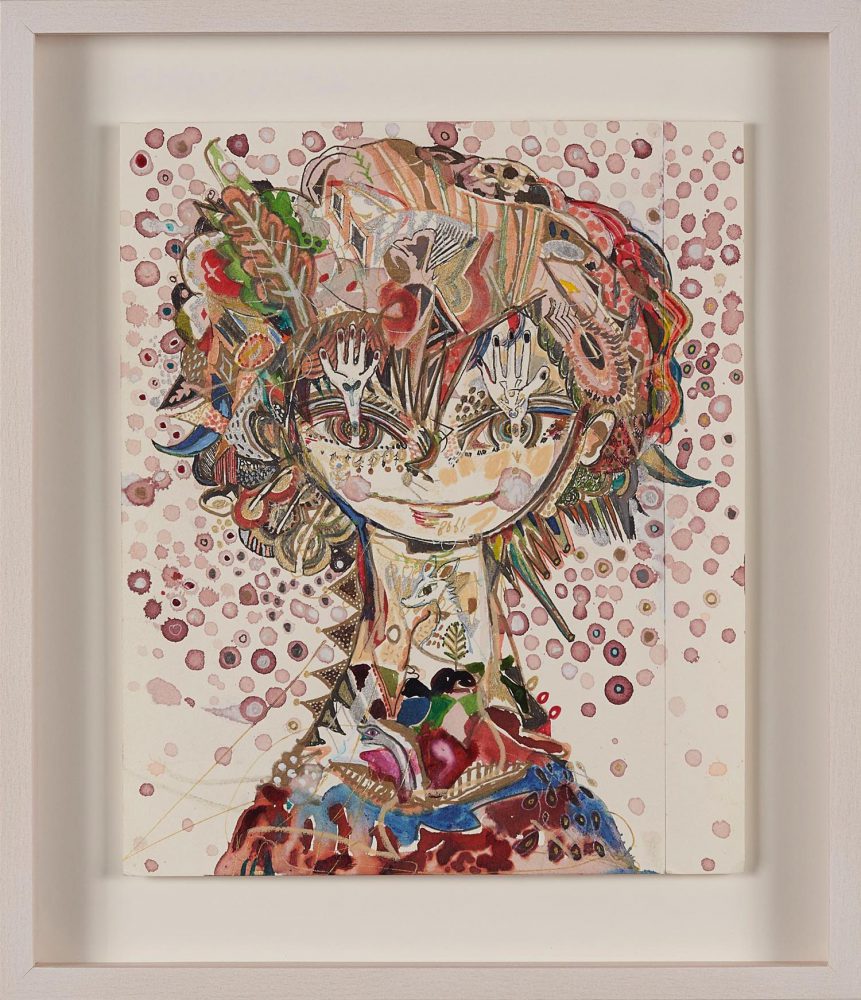 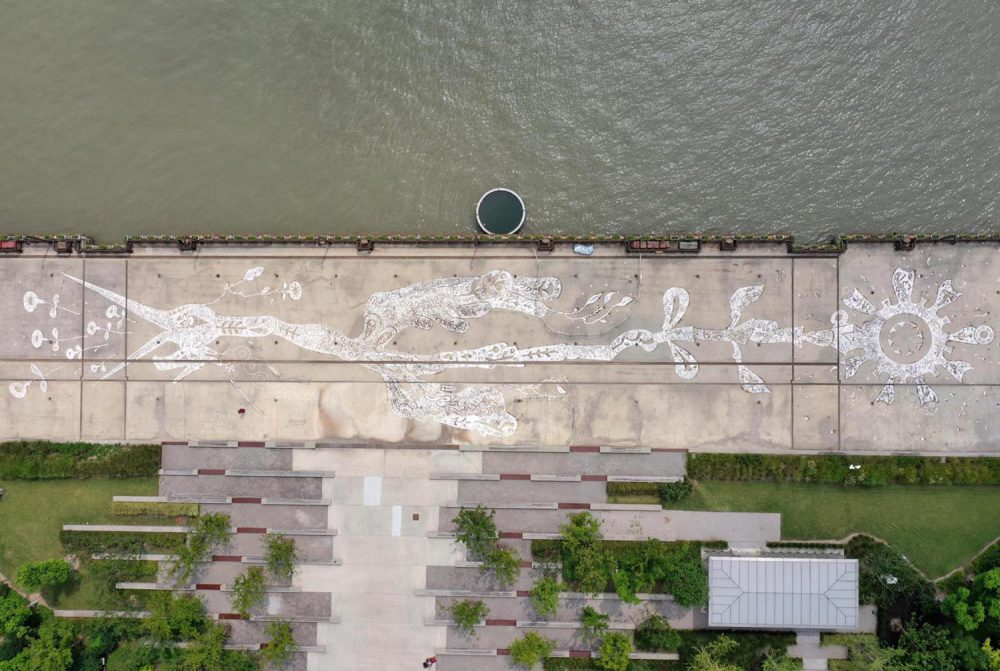 The Tree of Life
“Meet the Collection ” Installation view at Yokohama Museum of Art, 2019
Photo by Haruyuki Shirai
© Yusuke Asai